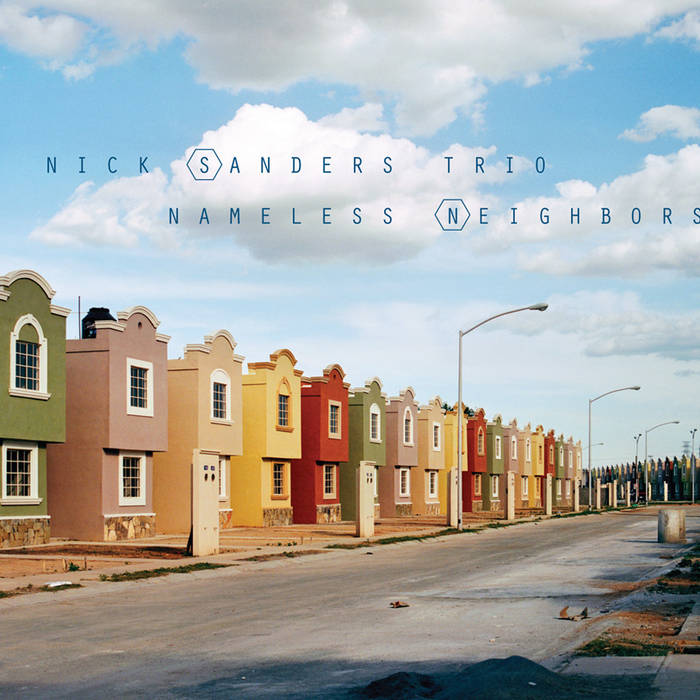 Music impacts life. Life impacts music. For jazz pianist Nick Sanders, his life experiences and his musical influences have converged in a perfect storm, creating a truly fresh musical voice – wholly original yet clearly shaped by the masters he has studied and embraced. His unique sound is profound, soulful and rich, resonating with the moody isolation that characterizes so much of modern life, yet also with our deep yearning for human connection … both sentiments clearly expressed on his debut recording for Sunnyside Records, Nameless Neighbors.
Sanders is the product of a musically and culturally rich childhood. His Cuban mother, drummer father and New Orleans upbringing insured an eclectic ear and musical sensibility. Sanders began playing music at a very early age, beginning before the age of four as a quick study on the drums, able to almost instantly learn the second-line beat. He tackled the piano in second grade and began to show remarkable promise as a classical performer, winning numerous competitions.
It was a chance meeting with pianist Danilo Perez at the New Orleans jazz institution Snug Harbor that would change his trajectory. Sanders had been studying classical piano at the famed New Orleans Center for Creative Arts and asked Perez’s opinion on when and if he should change to the school’s celebrated jazz program. Perez’s answer was, “Now! Do it!” The next semester, Sanders was in the jazz program. The following year his trio was voted Best Ensemble, and Sanders himself won Best Soloist at the North Texas State Jazz Festival. He appeared at the New Orleans Jazz and Heritage Festival and in 2005 began performing regularly at local jazz clubs.
That same year, 2005, would be unusually poignant for young Sanders. He experienced personal tragedy as he witnessed the devastation of Hurricane Katrina firsthand and the passing of his mother. Though thoroughly shaken, his dedication, hard work and ability earned Sanders a full scholarship to the New England Conservatory of Music. He finished his Master of Music degree there in 2012 after studying with the College’s exceptional staff, including Danilo Perez (his inspiration to study jazz), Jason Moran, Fred Hersch, John McNeil, Ran Blake and Cecil McBee.
Shortly after graduation, Sanders began work on his debut recording – Nameless Neighbors -- with the help of friend and mentor Fred Hersch, who produced the album. He enlisted his trio - who Hersch asserts, “breathe as one” - featuring bassist Henry Fraser and drummer Connor Baker, to interpret a collection of ten original compositions and three offbeat covers.
The recording begins with “Chamberlain, Maine,” a cerebral yet spirited piece that seems to change moods with ease and is highlighted by drummer Baker’s remarkably intuitive sense of rhythmic interplay. “Sandman” is a free elegiac meditation while “New Town” provides bombast and vigor along with subtle trio play. “Row 18, Seat C” is a dancing tune with stylistic shades of early Keith Jarrett. “Hymn” is a good example of the group’s measured bearing while “Dome Zone” is a look at Sanders’ amazing solo language. The playful “Flip” features a superb solo from bassist Fraser and some interesting rhythmic trickery.

Herbie Nichol’s “’Orse at Safari” is a compelling example of plying the master composer’s eccentric vocabulary into a modern setting. The title track begins as quietly secretive before it reveals its hidden knottiness, exploding in a charismatic foray. The trio’s spirited take on Thelonious Monk’s “Manganese” shows their ease with Monk’s unique compositional style. “Simple” slows the pace with an introspective bass feature leading to a beautiful heartfelt melody that calls Erik Satie to mind. Beginning softly with Gershwinesque motifs, “Motor World” quickens into an aggressive and expressive showcase of the band’s dynamic range. The recording closes with a solo rendition of the Ink Spots’ classic “I Don’t Want To Set the World on Fire,” a refined bookend to a well balanced and nuanced debut.
Nameless Neighbors is the compelling introduction to a resonant and powerful new voice in the jazz world. Once heard, Nick Sanders’s sound will speak for itself…both for his musical artistry and his deep and almost mournful reflection on life and the modern human experience.