← back to
Sunnyside Records
Get fresh music recommendations delivered to your inbox every Friday.
We've updated our Terms of Use. You can review the changes here.

You Are A Creature 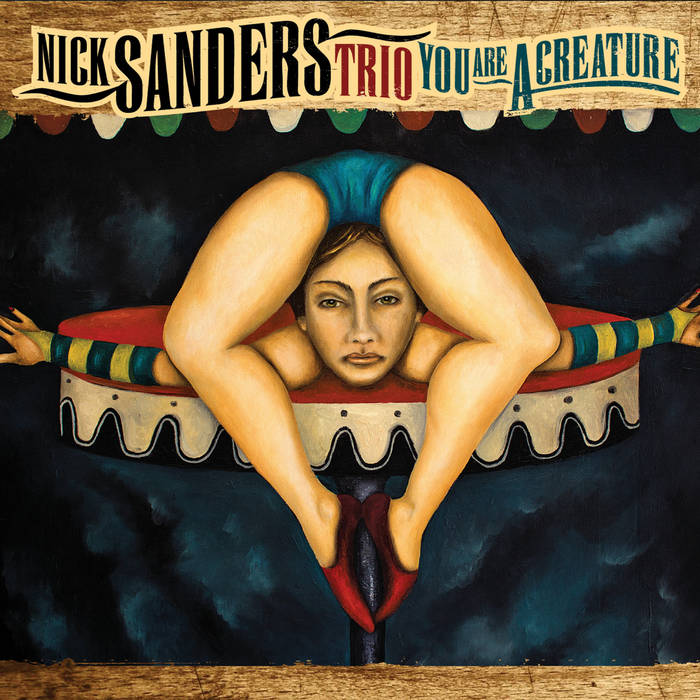 Pianist Nick Sanders christened his second CD, You Are a Creature, with a head-scratcher of a title, but his virtuosity and vision couldn’t be more clear on the music within. Throughout the album’s concise but idea-packed thirteen tracks, Sanders continues to hone and evolve his distinctive voice as an instrumentalist and composer as well as the unique collective identity of his trio with bassist Henry Fraser and drummer Connor Baker. Due out February 17 on Sunnyside Records, You Are a Creature offers further evidence of a major new voice on the modern jazz scene.

As for that title and the attention-grabbing cover image of a sideshow-poster contortionist, both ultimately relate to Sanders’ original perspective on human nature, an ability to see everyday behavior from a fresh angle that comes through in the often-surprising twists and turns of his music. “A lot of times I’ll just look at someone and realize that some of the things that we do are so strange,” he explains. “And the music is very reflective of those different experiences that people go through in their lives. I think that life in and of itself can be like a sideshow.”

Sanders’ individual approach and the strikingly singular language developed by the trio have commanded the attention of no less discerning a stylist than pianist Fred Hersch, who not only encouraged Sanders to record his 2013 debut, Nameless Neighbors, but offered his services as the album’s producer. Hersch returned to that role on You Are a Creature, offering insightful direction but also upping everyone’s game simply by his commanding presence in the studio.

“When you know that Fred Hersch is watching and listening to everything you’re doing, you have a tendency to deliver at your utmost capabilities,” Sanders describes. “But the best thing about it is just having someone so knowledgeable, who has been in the game for so long, there to give you feedback. It’s huge, to know that there’s someone with great ears who has my back. He really understands my music and had a lot of interesting arrangement ideas, which we could take or leave without any judgment on his part. There was no ego. We work really well together.”

It helped immeasurably that Sanders brought such a wealth of material into the studio with him. The tunes can all be traced back to personal experiences and relationships in the pianist’s life, which imbue the complex and multi-faceted compositions with a strong emotional core. From the insistent and aptly-named opener, “Let’s Start,” through the dissonant musings of “Wheelchair” and the off-kilter carousel of “Round You Go,” to the stark, shimmering lurch of “Day Zombie,” each piece is memorable and intricately constructed while allowing for an intimate and spontaneous three-way conversation among the trio, all within the relatively tight constraints of pieces that rarely exceed the five-and-a-half minute mark.

“In this day and age, people’s attention spans aren’t very long,” Sanders says. “Because it’s a trio, it’s really more about interacting and having a group sound as opposed to just having people soloing. It also allows me to show different aspects of my compositional worldview.”

That worldview was honed by a number of foundational influences, none of which are overpoweringly obvious but each of which has contributed to Sanders’ one-of-a-kind sound. There’s his hometown, New Orleans, with its rich jazz heritage; there’s his training in classical music; his upbringing hearing and singing hymns in church; the musical influence of his drummer father and the presence of Latin music via his Cuban mother; and his studies with some of modern jazz’s most renowned artists, including Fred Hersch, Jason Moran, Alvin Batiste, and Danilo Pérez. A final, more unusual, influence that Sanders cites, one reflective of his generation, is that of video games. While video games may not seem to have much to do with jazz piano beyond the use of hand-eye coordination, their combination of the cinematic and the interactive is immediately evocative of Sanders’ music.

All of those influences converged when Sanders joined with Fraser and Baker while all three were students at the New England Conservatory, where Sanders completed his Master’s degree in 2012. The trio quickly realized that they possessed a special alchemy together, one that was soon recognized by listeners. You Are a Creature showcases their continued maturation, offering a carnival’s worth of delights and surprises.